EmPact - Info Hub for the Homeless of New York City

Project Management | Database Design | UI Development
Project Overview
EmPact is a Lambda School student project that was conceptualized, researched, and built over a 5-week period. This application assists people experiencing homelessness to become aware of and locate resources. Our hypothesis was that the integration of technology in homelessness resource distribution would improve accessibility, increase impact, and empower the homeless population.
My Contributions
This project involved wearing several hats—Over the 5 weeks, I managed our product scope, gathered data from the New York Open Data Project to construct our database, and worked closely with our UX Designer to develop the User Interface. 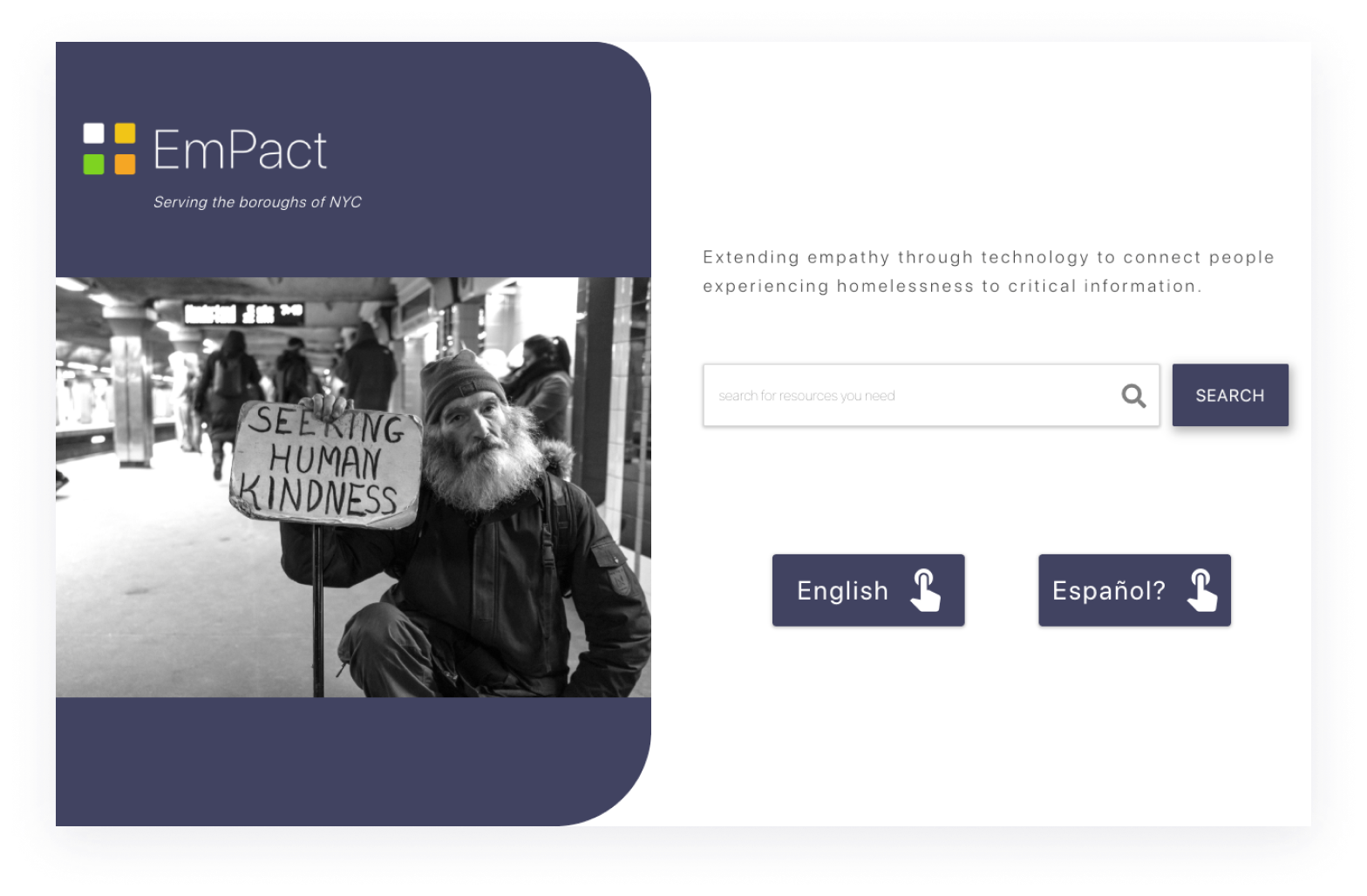 The initial idea for EmPact came from Web Developers and Lambda School Students Caitlin Giguere and Emily McClanahan. They felt a strong pull to leverage technology to make a social impact, and wanted to do something to aid the community of people experiencing homelessness.
‍
Over the course of our 5 weeks to prep and build, I helped guide the team to pivot from aspirations of building an app with a national scope that would span the U.S to a smaller, more focused scope that would serve the largest per-capita homeless population in the U.S, which exists in New York City, New York. The decision to serve the populace of NYC was cemented by the existence of a massive open data repository—The New York Open Data Project—that would give us access to scores of data about the locations and services available to the homeless population of New York.
‍
We worked tirelessly to aggregate, normalize, and consume the relevant data from across the NY Open Data Project, and spent much of our time in the early stages architecting our firebase database to accommodate the parallel development of both desktop and iOS native apps.

The tightrope act of managing a monolithic database with a tight deadline for developing the User Interface became a defining force of this project, and informed much of how I would approach every other project I've worked on since. In our zeal, we attempted to build a product that would deliver on users being able to access—based on their location through the Google Maps API—information about resources near them for each of: shelters, health care, food, hygiene, outreach services, education, legal resources, and jobs.

We learned important lessons about scope management, and I determined that if I were to have re-built this product from the ground-up I would have started by researching which of those aforementioned categories of resources correlated with the greatest need and least visibility to the homeless population of New York City, and built a first release intended to deliver that information flawlessly. Then I would have repeated that process, building out the experience for each category of resources in order of the intensity of need and iterating based on user feedback.
EmPact
PM | DB Architect | UI Dev
Mar 2019 — Apr 2019

Want to work together?

If you like what you see and want to work together, get in touch!